So, this weekend I decided to try new thing - night photography, starry sky... I mean, the most reliable meteor shower of the year, warm night, cloudless and moonless sky, Saturday, can sleep in next day - ideal conditions. Scouted locations to pick something with water and beach in the foreground but away from city lights and drove there after midnight. Saw 5 or 6 meteors while setting up tripod and making couple experimental high ISO exposures to calculate the final one. Sure enough, caught one meteor in the experimental exposure below. You can see that it was a try rather than intended shot - starts started turning into trails because of 38 seconds exposure time, while to keep them as points I'd need about 20 seconds. Here it is: 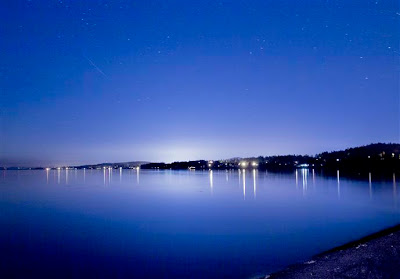 Second one was one of the two intended shots: meteor crossing the sky against the background of stars as points. Took a few shot to catch the meteor in the frame but I got lucky quickly enough. Here is the result: 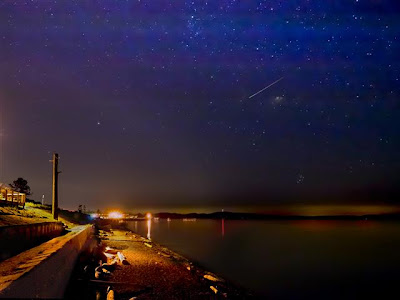 I was reasonably happy with this one, so I moved on to the next idea: meteor crossing the sky against the background of star trails. This is where I failed miserably. Not only no single one appeared in the frame, while about couple dozens lit up the sky elsewhere; I also made a novice error... see, my exposure calculations gave me 45 minutes exposure time and I adjusted aperture correspondingly, totally missing the fact that the longest bulb exposure my camera could keep was 30 minutes. So, when it closed the shutter, I've got disgustingly underexposed and non-salvageable shot. Considering another 30 minutes camera needed for dark frame subtraction and my unwillingness to spend the whole night on the beach, I drove home, calling myself various names for the beginner's mistake. Before calling it a night however, I set up the tripod in my backyard for another quick try, merely 17 min exposure... and got decently rewarded for persistence: 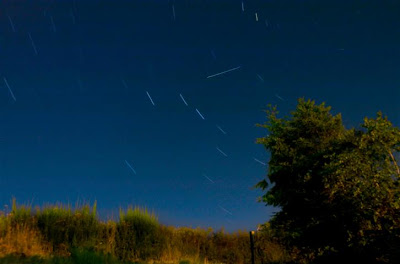 Not exactly what I had in mind, mind you, but this is my first try... I'll do better next time.
Posted by Vadym Graifer at 1:45 PM

This is a question I wanted to ask you, pertaining to exposure time. My Sony isn't capable of more than a couple of minutes - cheap entry level model it is - so already job well done for getting what you did. An area I would like to begin experimenting myself. Please continue with the self-feedback, it's constructive. Nice photos btw.